...and then one night

One old friend met another old friend in a garden. And it was beautiful.
Posted by Rita Finn at 7:33 PM No comments: 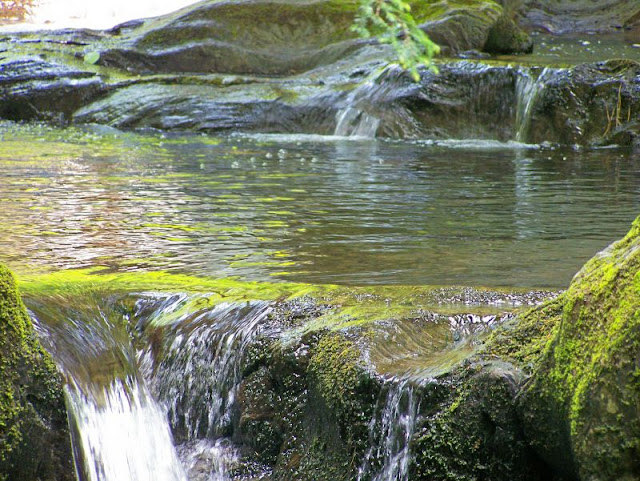 When I was little, we used to spend several summer weekends at a campsite in Westfield, Vermont. On the corner of the campsite was a general store where, when we had arrived and my childish energy knew no bounds, my father would give me a quarter and I would run to buy myself an Eskimo sandwich. Naturally, this must have bought my parents time to set up camp. My other sisters and I would shed our clothes (we had put on our bathing suits underneath), grab a towel, and follow the dirt road up the hill to the natural pool in the woods. On our way we would encounter other kids on their bikes, without helmets, barefoot and with towels around their necks. We would all return later, hungry and pleasantly exhausted, our bathing suits stained green from the moss and slime that grows on rocks in moist northern environs.

My father grilled hotdogs and hamburgers -- nothing fancy like today's gourmet grillers. My sisters and I would hang out with the Paxton boys, the sons of the family that owned the campsite. They would tell us scary ghost stories well into the wee hours, and I became convinced that the bridge on the grounds was haunted and I would not survive traversing it alone.

Every morning, my father would get up early to cook bacon and eggs on the fire. We would then go for a walk, the two of us alone. He would stoop down to point out chipmunks or interesting birds to me, and stop to light a cigarette from time to time. He was so handsome in those days, wearing a hat, and his skin turning brown in the sun. I haven't been camping since I was about ten years old, and wow do I miss it.

Do you have fond childhood memories of camping?
Posted by Rita Finn at 12:52 PM 3 comments:

My Sweet Bay Magnolia has finally bloomed, and while this may seem an uneventful occasion for most, it made me pause and reflect upon the year that has passed and how much, and how little, has changed in the year since I last photographed its blossoms. While the nuances would get lost in a blog post, I feel myself getting closer to a vision of life that involves more joy and less stress.

My husband and I tackled that basement this weekend. In October of ’08, I saw this at Inspired Room and printed it out as motivation. I longed for a basement and garage that I could walk into and know exactly where to go to find whatever it was I was looking for, and to end those needless trips to Lowes to buy yet another pack of sandpaper or quart of varnish because I couldn’t find the one we bought only weeks ago. What’s more, I haven’t been in my studio in the basement for too long because of the chaos surrounding it. It is a myth that messiness and creativity necessarily go hand-in-hand. We opened boxes we hadn’t opened since we moved in six years ago. I went through paperwork of things that I kept over several years and found humor and solace in the things I was interested in and chose to keep.

Our basement doesn’t look like the one in my fantasies … yet. But I can make my way to the place where I paint, and I have lots of inspiration as fuel.
Posted by Rita Finn at 8:09 PM No comments: