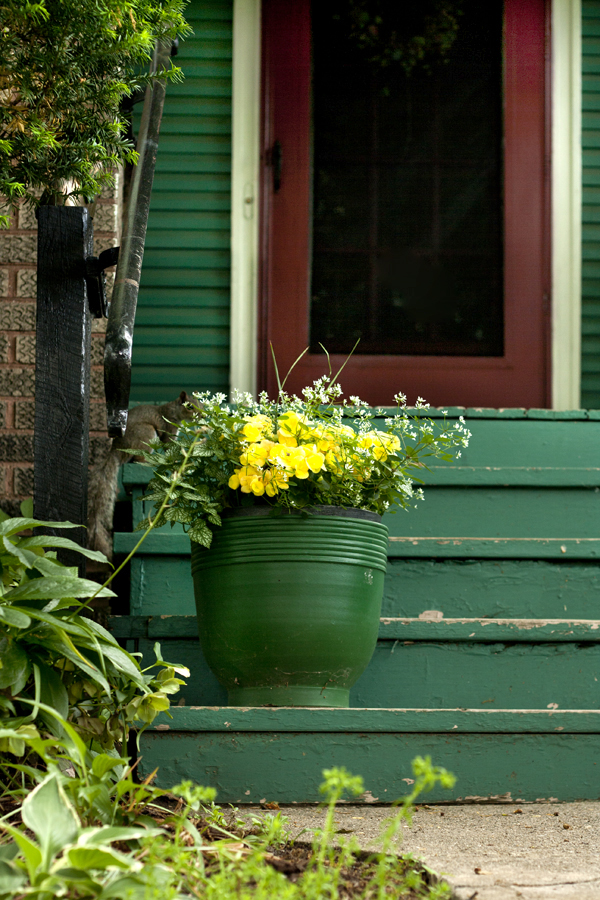 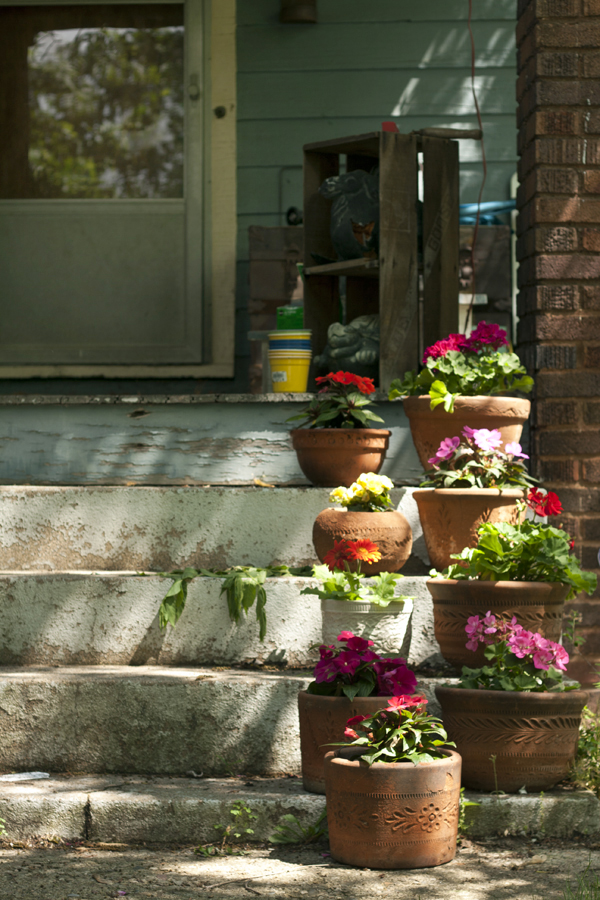 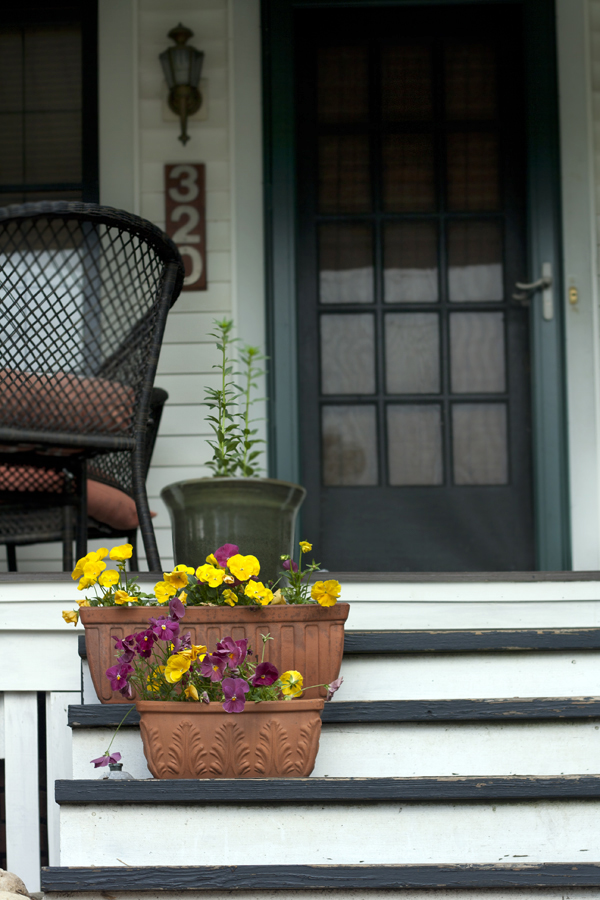 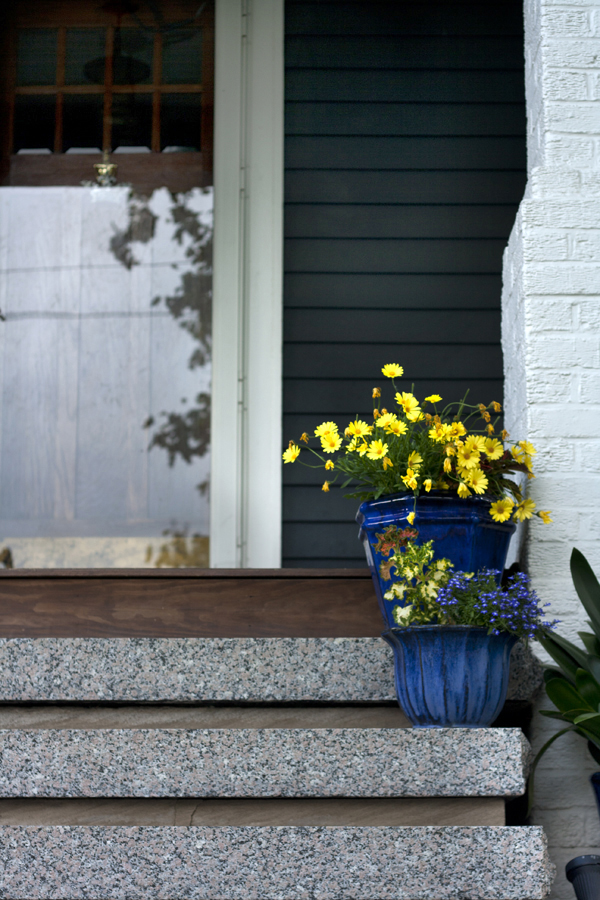 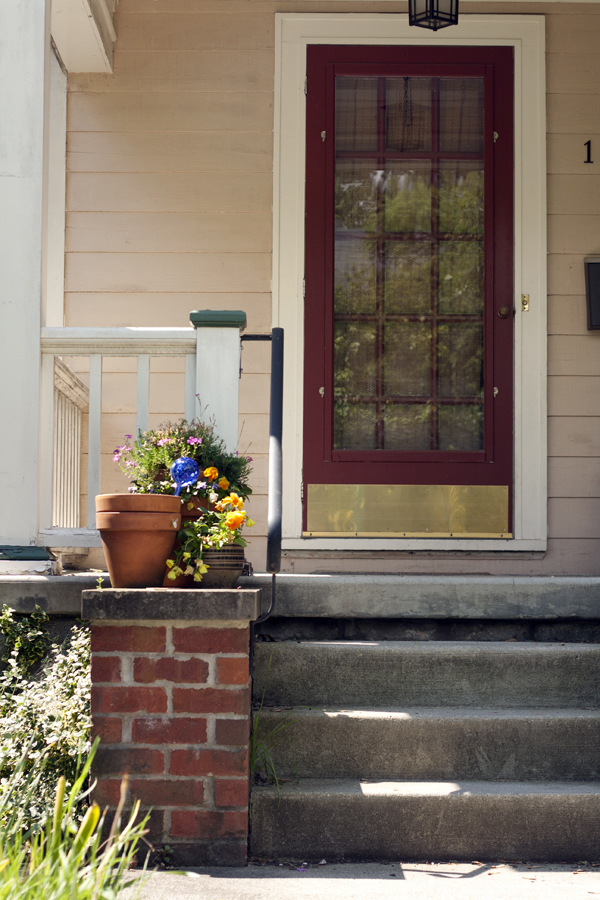 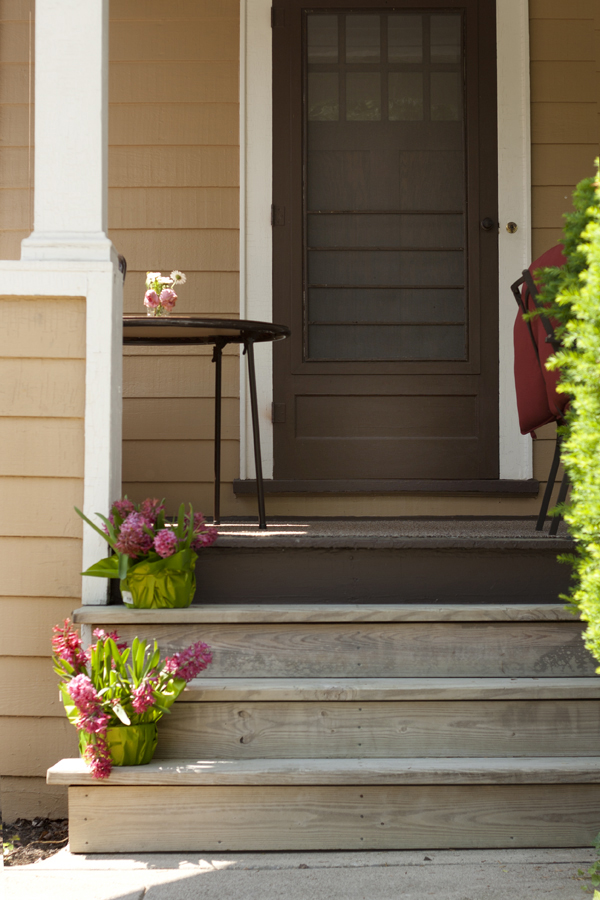 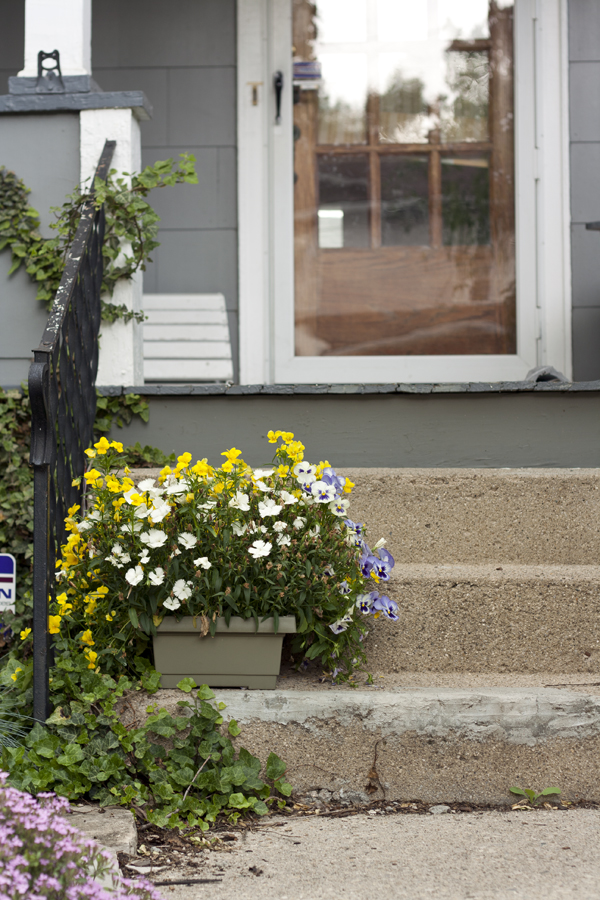 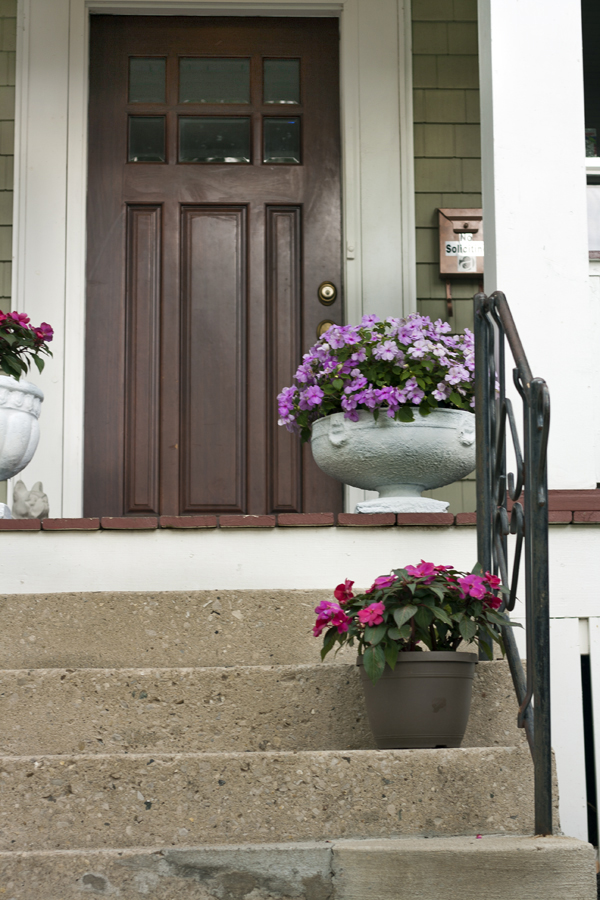 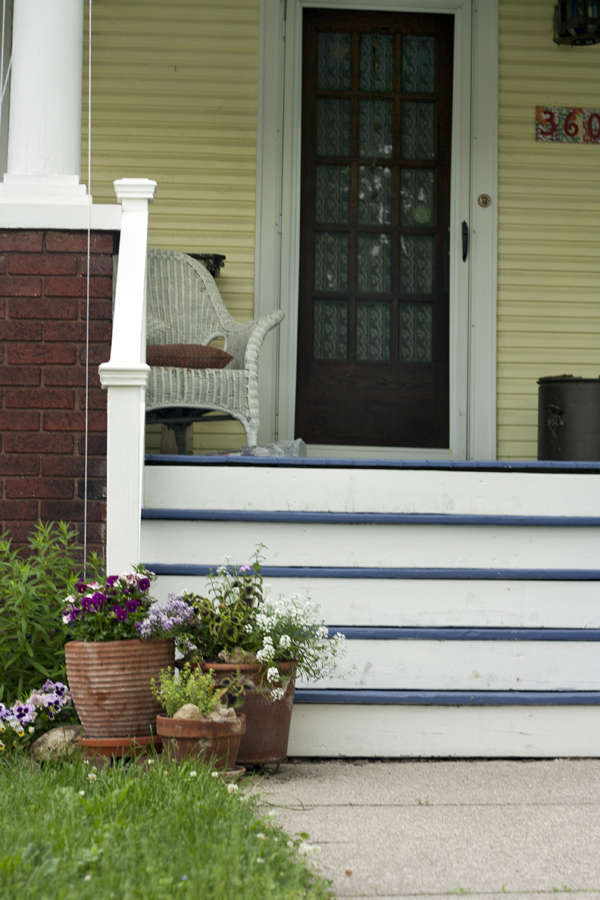 I went for a walk today and noticed how many people have potted flowers on their porches. I tried to deduct certain things about the inhabitants by their choices of flowers, pots, and placement. Some were simple and elegant, others were elaborate and formal. All were sweet ways of welcoming visitors.
Posted by Rita Finn at 8:05 PM 1 comment: 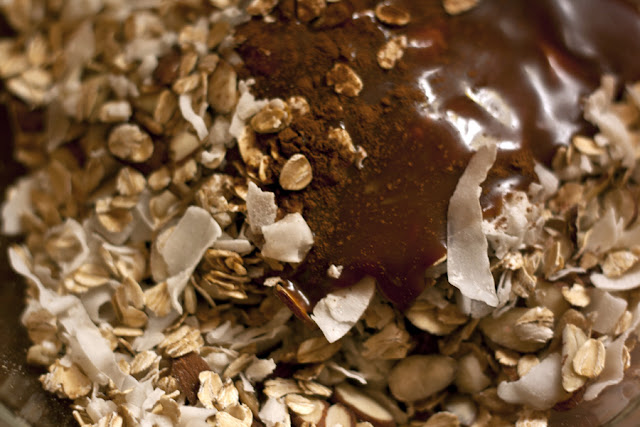 I got a surprising amount of requests for my granola recipe yesterday, so I thought I might share. My idea of granola is to look in the pantry and see what I have on hand. Change up the nuts, fruits, and flavorings as you wish, or use what’s available. The oat base stays the same. Once you pick up the spirit of experimentation, and keep volumes the same, you’ll notice how many directions you can take granola. So, get creative!

Directions
Preheat oven to 300 degrees. In a large bowl, combine all dry ingredients. Mix them well with your hands. Add moist ingredients and continue to mix with your hands until all ingredients are well combined. Transfer to a baking sheet and spread in an even layer. Bake until oats are lightly golden, 25 to 35 minutes. Let cool completely on sheet on a wire rack, 20 minutes.
Posted by Rita Finn at 6:45 PM No comments: 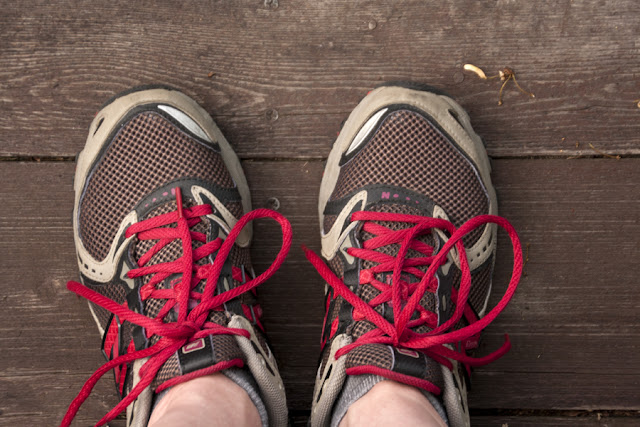 I start a new job on Tuesday, which is to say it’s a freelance gig, but I am so excited nonetheless. Some of you may know that I’ve been out of work for north of six months. A lot can happen in six months. An unbelieveable lot. When you are working full-time, sometimes the idea of being unemployed even for a short time takes on a rosy, sort of romantic glow. It seems delicious, doesn’t it? But no, it isn’t what you imagine. I did not once, contrary to one thoughtless question, spend my days eating bon bons and watching soap operas. I worked full-time, and then some, at networking and finding a new place to hang my hat. I went to the gym almost daily where I learned that Regina Spektor’s complex song ‘All The Rowboats’ deftly synchronized the movements of everyone in the gym, from people on ellipticals and bikes as well as weight-lifters. When you are a designer, you impose patterns where they are not always evident. I went to my ballet and modern dance classes, where I made progress, and made friends. I became a human rolodex, having coffee, lunch, dinner and wine with acquaintances and strangers alike, listening and sharing bits of myself, and gaining a little from each person I met. I went to networking events at 7:00am and at 9:00pm. I wore nametags, and shook hands with authors as well as young women in high school. I memorized my elevator speech better than Prospero’s final speech in The Tempest, which I had to learn in high school English class. I weeded my closet. I weeded my closet again. I helped a friend conceptualize a bridal show. I renewed and nurtured a friendship with an old colleague who was also recently displaced. I hung a painting in a gallery, with their permission no less. I interviewed for jobs I did not want just for the experience of interviewing. I built an online portfolio. And then another. I participated in a hundred webinars, on networking, resumes, professional marketing plans, and interviewing. I learned who my friends are. I do not mean that as a sideways slur against anyone who might not be a friend. I got more encouragement and support than I deserve, and people came out of the woodwork to introduce me to someone who might be helpful to know. Friends went on walks with me, and took me out for pizza and beer and let me ramble. I sent more ‘thank you’ chocolate through the US Postal Service than any non-commercial enterprise in US history. I ran in the Komen Race for the Cure for the first time (Thank you Stephanie and Team Perez!), after working at the event for several years. (Okay, “ran” is a misleading, but I gave it an honest go.) There were small miracles around every corner, opportunities for me to grow and to learn humility. I learned that, while I love what I do, my job alone does not define me. I have green eyes, a quirky sense of humor, and can make a meaner granola than the gal who works at the health food store. I like lavender, chocolate and singing in the car. Orange is currently my favorite color. And I can do hard things. These are the things that define me.
Posted by Rita Finn at 6:28 PM 4 comments: