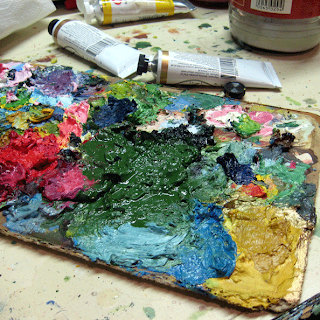 So, I've been haunted for years by this need to form concrete ideas about the nature of creativity. I've put far too much thought into pinning down the one discipline and style that calls the loudest or, at least, that I can follow the longest. An email from my old neighbor and good friend Ted brought this question to light once again.
First let me tell you a bit about Ted. We lived next door to each other for more than ten years. (And between the two of us, we should have the lion’s share of stock in that Chinese restaurant a stone’s throw away from our old apartment building because we lived on Phad Thai for at least a year. I digress.) He’s a delightful, intelligent and talented man who gave up writing for chess. He’s a great chess player and has taught me a few moves, though I can’t say I’ve ever beat him. He’s also taught me much about art, music and beauty. If you have people in your life who have done that for you, count yourself blessed.
So, Ted has all these creative juices that have been building up inside him and perhaps creating dangerous levels of serotonin in his brain. Mind you, chess is a very creative pastime, and I can understand where one gets to in life that he turns his back on the Muse. But the Muse isn’t going away.
For me, it is perhaps a stunt in my developmental growth that keeps me creating; the need to work on something and in the end, look at it and say, “I made this.” We humans have been doing this for thousands of years and I don’t see an end in sight.
If you look up the Cave of Hands in Venezuela, over 7,000 years ago the tribesmen painted silhouettes of their hands onto the cave walls. There are other scenes of hunting and of women making a refreshing raspberry sorbet, but for the most part the imagery says, “I was here.” The images may also have some ritual use, and isn’t that what artists today are participating in every time they begin?
My own muse has the same navigational troubles that I have and can’t make up her mind about which direction to lead me in, and the message is perhaps more intricate than I’ve made it out. Not only do I want to say, “I was here,” but that I’m here for such a short time and during my visit I've seen magical things that brought tears to my eyes and I want to use my clumsy tools and share these things with others, and hear them say, ‘Yes, yes I see it too.”
So Ted, your muse is still waiting. And I too will get back to the canvas as soon as I get this 6 pound purring beast off my lap.
Posted by Rita Finn at 6:42 PM No comments: