The Art That Steel Built 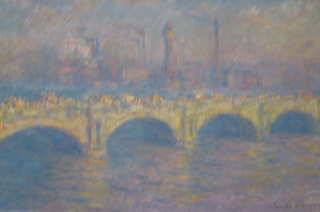 We went to Pittsburgh Friday to visit the Carnegie Art Museum. If you’ve never been to Pittsburgh; do go, and enter the city from the west via the Ft. Pitt Tunnel under Washington Mountain because when you emerge, splash! You are hit with a dramatic shot of the city. No matter how many times I visit Pittsburgh, I still find this exciting.
My visit to the museum was interesting because when we arrived, on a fine weekday afternoon no less, the museum was packed. With people. There to see art. This is remarkable because not a three hour’s drive away in Columbus, we’re closing the doors on our symphony because of lack of funding and patronage. And here we were in Pittsburgh surrounded by people of every age, class and ethnic heritage coming to see art, which I thought was dead. It baffles the mind.
I’ll tell you about the Carnegie Museums this week, but first I’d like to tell you a bit about the man who is surrounded by so much myth. Andrew Carnegie was born in 1835 to a working-class family in Dunfermline, Scotland. In 1848, the family left Scotland for America where his father hoped to find work as a weaver, but never succeeded. Andrew took a job in a factory making $1.20 per week, though he later found another job at a steam engine factory making $2.00 per week. The factory manager was so impressed by his penmanship and intelligence that he promoted him to clerk of the factory. At the age of 14 he changed jobs again, this time becoming a messenger earning $20 per month. In 1853, Andrew started working at the Pennsylvania RR telegraph office where he learned the ins and outs of the railroad industry. From the time he was thirteen, until and after his father died in 1855, Andrew was the only breadwinner in the family.
In the following years, he invested in sleeping cars and oil, got drafted in the army, and founded the Keystone Bridge Company. It was when he was thirty-three years old that he outlined for himself a plan to retire at age thirty-five and devote himself to philanthropy and his own education. Though he failed this goal, the powerful urge to bring education to the people had him building libraries throughout the country, one of which sits proudly in downtown Columbus.
If this sounds like a Cinderella story, it is in part because it is. He wasn’t a man without flaws. While he was entirely a self-made man, he paid his employees the low wages typical of the day. I myself will never make a fraction of money Carnegie did; nor did I start working at the age of twelve and I can easily say that I’m not willing to work as hard as he did. His interests in art, nature and education might have compensated for his lack of them as a child. While philanthropy and public works were common for millionaires of the day, Carnegie was not like the suave Harvard-educated William Randolph Hearst who became famous for his hoarding of art from around the world for his own pleasure.
The world we live in today is very different from that of Andrew Carnegie. That Victorian spirit of philanthropy is gone, but witnessing the multitudes of art enthusiasts at the museum has shown me that an appreciation for art and culture is still quite alive. Whether or not they know the names of artists represented in each gallery, one still senses that the visitors think it is important enough to explore.
And whatever my feelings for the Carnegies, Rockafellers and Fricks of the world, the legacies they leave behind are bigger than the men who made them and will last through all time.
Posted by Rita Finn at 10:07 PM No comments: