Has it really been a year? 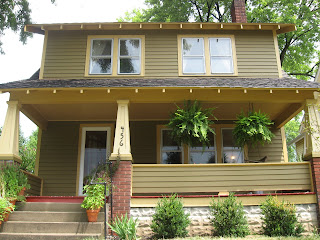 One year ago, my husband and I were in the midst of a home renovation nightmare that you would not have believed if you were sitting in a movie theater seeing a production by Paramount Pictures. We wanted to have a new roof and have all the aluminum siding removed to reveal the beautiful original wood siding, which we would then paint. Just a simple couple with a little dream.
We secured a roofing contractor who hooked us up with a subcontractor to do the rest for what seemed a reasonable price. The work began on a fine June morning. Upon waking, the outside of our house was swarmed with illegal Mexican laborers. Neither my husband nor myself speak Spanish, but we appreciated the gruelling labor these men performed on a daily basis in blistering heat, so we supplied them with burritos and pizza. The music they listened to while working was a little grating, but it kept them happy.
As the original siding was slowly revealed, we found that most of it was in fairly good shape, but much of it needed replacing. Our home, the work site, was visited by what we assume was the Coyote, a vile creature with gold chains, bad teeth and an ugly way of speaking about the opposite sex. The general contractor, who was on a perpetual verge of a complete nervous breakdown, was rarely present, so my husband acted as the GC - in addition to his full-time job. I put on my jeans and grabbed a paintbrush every evening in hopes of hurrying the work along myself. Then there was the small fire on our front porch. And the watered-down paint (at $50/gallon) to make the work go faster. The icing on the cake was the clash that ensued between the laborers when it was discovered that the lead painter was hording the cash draws instead of paying his team. When the police came to shut down what was about to turn into a violent scene, they were met by what appeared to be a street gang. They had to close off our street from traffic.
What was to be a two-week project stretched into July, when we expected a week-long visit from my sister and brother-in-law. I had failed to alert them about the war-zone that had once been our home because I had hoped to surprise them and assumed the work would be done. To this day, I shake my head in disgrace every time I think of that of that one omission and the less-than-stellar visit they had.
A few weekends ago, as an almost therapeutic gesture of closure, my husband and I repaired the paint that had failed.
I sometimes dream of updating the kitchen. Then I hear echoes of Party Like a Rock Star and shudder.
Posted by Rita Finn at 8:05 PM 1 comment:

Put Your Records On

You heard Corrine. Go ahead and let your hair down.